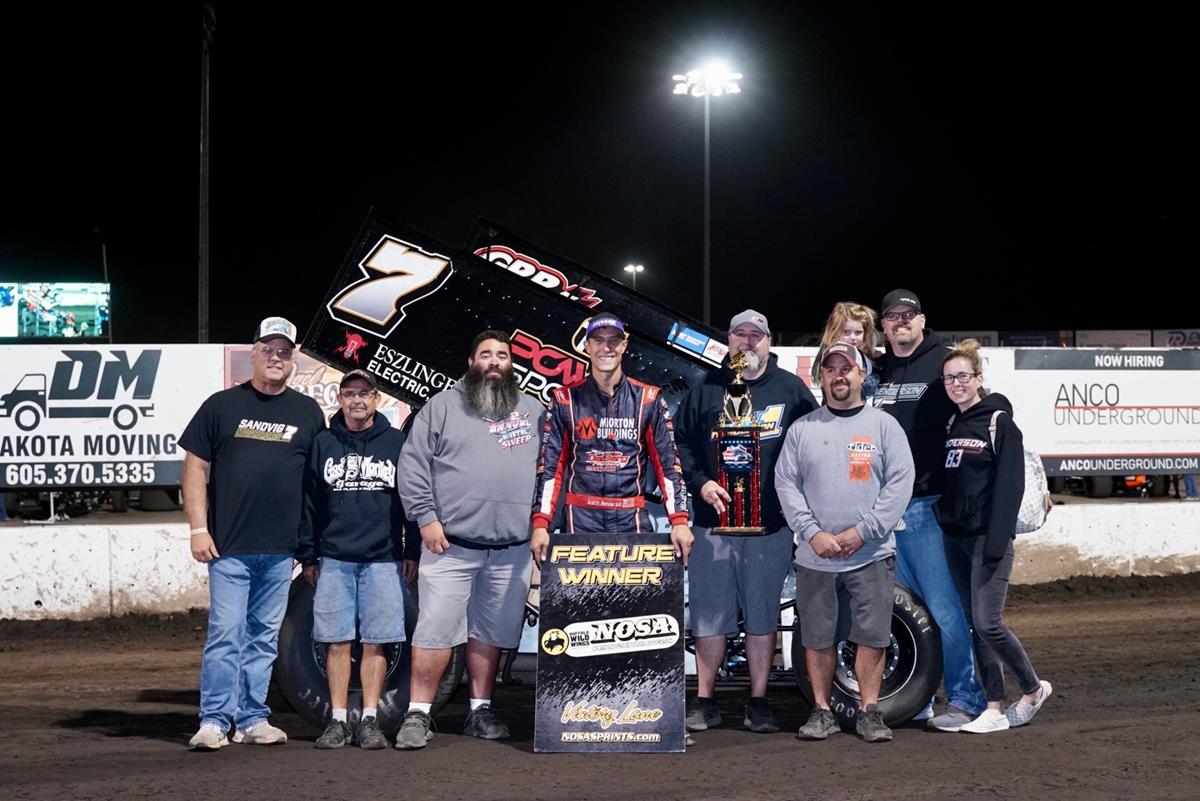 Inside Line Promotions – BRANDON, S.D. (Sept. 27, 2021) – Justin Henderson finished a dominating season at Huset's Speedway in style last weekend as he picked up a victory and a third-place result during the Buffalo Wild Wings Northern Outlaw Sprint Association doubleheader.

The win was his fifth of the season at the dirt track and the podium finish on Sunday locked up the 2021 Casey’s 410 Sprint Cars presented by Big Frig championship for the Mike Sandvig Racing No. 7 team.

"We only got one win and I really wanted two, but I guess that would be greedy," Henderson said. "It was a long weekend, but a rewarding weekend and I'm really proud of the accomplishment."

Henderson held a 28-point advantage in the championship standings entering the weekend and he kicked off Saturday evening by timing in second quickest in qualifying with a lap of 11.081 seconds. He then advanced one position in a heat race to finish third. Henderson garnered the pole position in the feature courtesy of a fortunate redraw.

Henderson was the dominant car as he led all 25 laps of the main evnet to score the $4,000 victory. In a race that featured five total cautions, the final one with two laps remaining proved to be the most beneficial as it provided Henderson with the clean air he needed to pull away as he was struggling in traffic with the race winding down.

"We came up on a bee’s nest of lapped cars and they were just slicing and dicing everywhere and I had nowhere to go," he said. "I heard second coming behind me and I got that late yellow and it really saved us. Clean air means so much in these cars and it gave us the room to really just take off and win."

Sunday's finale started off with a bit of excitement as Henderson arrived to the track only minutes before taking his qualifying lap after flying in from Minnesota, where he attended his sister’s wedding earlier in the day.

He proceeded to lay down a lap of 11.469 seconds in qualifying, which was good enough for 13th quickest out of 23 drivers. Henderson then advanced three positions in a heat race to place second.

"It was a really long day, but it was worth it to be able to do both the wedding and the race," he said. "I managed to get myself into a redraw position there in the heat race and that really just made me feel better about the whole night. I knew what was at stake and to be able to take care of business there and create an opportunity was great."

Henderson took the green flag from the outside of the front row and he withstood a tricky track to come home third. The top-five finish was his 12th of the season in 18 starts at Huset’s Speedway.

"Come feature-time I don’t know that we were any worse than the leaders, but I just never felt like I could really get up there and challenge," he said. "We raced pretty hard and clean there for second and ended up with a podium finish and in one piece. That's all you can ask for and it really finishes our year at Huset's where we want to be and that's up front."

Following a disappointing finale a few weekends prior at Knoxville Raceway in Knoxville, Iowa, that saw Henderson finish third in track standings, the title at Huset's Speedway helped ease that sting. More importantly, it allowed Henderson to fulfill a promise to Sandvig to bring him his first track championship as an owner after multiple years of trying.

"We should have won two championships this year, but to know we've reached the level we always dreamed of doing as a team is pretty inspiring," Henderson said. "Mike gives me everything I need to succeed and to be able to repay that favor with a championship means a ton. I feel like we're a top program and this really stamps how far we've come as a team and the future looks bright."

This marks the end of the season for Henderson behind the wheel of the Sandvig Racing machine baring any late changes. However, Henderson is headed to Pennsylvania for the next two weekends to compete with the World of Outlaws NOS Energy Drink Sprint Car Series in the Indy Race Parts No. 71. He'll tackle the $75,000-to-win National Open at Williams Grove Speedway in Mechanicsburg, Pa., this Friday and Saturday as well as the Nittany Showdown at Port Royal Speedway in Port Royal, Pa., on Oct. 8-9.

"As fast as we've been together all season in Mike's car, I'm kind of sad to see our season over," he said. "But I've got a great opportunity to kind of parlay that success into an opportunity with Bernie and Indy Race Parts and I'm really looking forward to it. Bernie's cars always have speed and that tells me that if I do my part as a driver, we'll have a shot to win each night out."

“We’ve had a relationship with Morton Buildings for more than four years and they’ve really grown in the racing scene,” Sandvig said. “We’re thrilled to have such a reputable sponsor as part of our team.”