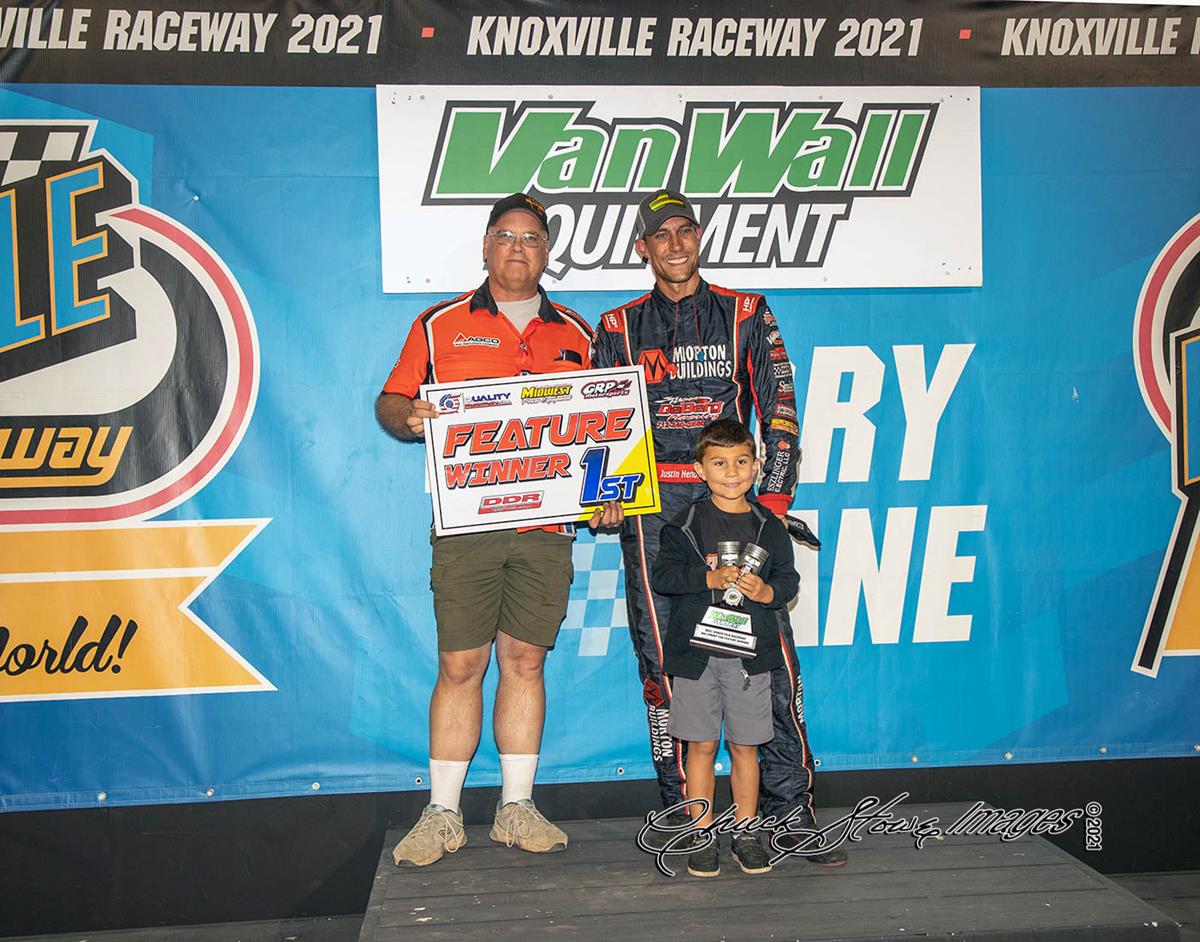 Inside Line Promotions – BRANDON, S.D. (July 20, 2021) – Justin Henderson went a perfect 2-for-2 behind the wheel of the Mike Sandvig Racing No. 7 sprint car last weekend as he picked up wins at Knoxville Raceway and at Huset’s Speedway on consecutive nights.

Henderson has won the last four events he’s competed in behind the wheel of Sandvig’s sprint car. He also earned the victory in his family owned No. 83 during the 360ci sprint car portion of the event on Saturday night at Knoxville Raceway.

“It was a great weekend for everybody involved and honestly I don’t know if it would have been much better,” he said. “I’m just trying to kind of soak everything in and enjoy what we’re accomplishing right now. The crazy thing is I think we can even be better.”

Henderson kicked of the weekend on Saturday at Knoxville Raceway, where he timed in second quickest among 26 drivers with a lap of 15.577 seconds. He then won a heat race from the outside third row and garnered the eighth starting spot in the A Main courtesy of a feature redraw.

He captured the 360 portion of the night from the fourth starting spot and headed into the 410 feature looking to sweep the evening for the third time in his career at Knoxville Raceway. Henderson jumped to the top of the track right away and by the completion of Lap 1 he was already in fifth. Two laps later he moved into the fourth position and he settled in over the next six laps.

A restart with nine laps completed grouped the field back together and Henderson capitalized by going from fourth to second. Two laps later he powered by the leader to grab the point by a narrow margin at the flag stand. He went unrivaled the rest of the way to score the victory.

The $4,000 win was the 13th of his career at ‘The Sprint Car Capital of the World’ and came with a half beef as a result of it being Van Wall Equipment/Marion County Fair Night. With his clean sweep of the night, he earned $7,000 total and he also skyrocketed to the top of the track’s point standings. He currently holds a 54-point advantage over second.

“We were fast right out the box and we only missed quick time by a few hundredths of a second,” he said. “I had a feeling from the get-go that we were going to win the 360 race and once that happened I knew it was our race to lose and something drastic was going to have to happen to not get the 410 win as well. Everything fell our way. It’s just nice to finally win one without breaking something on the car for once.”

Henderson and Sandvig headed to Huset’s Speedway on Sunday and for the second consecutive night the team timed in second quickest out of 23 drivers with a lap of 11.160 seconds. Henderson won a heat race from fourth and he earned the sixth starting spot for the feature after the feature redraw.

He moved into the fourth position early in the A Main and he inherited the second position following a wreck on Lap 10 by two drivers in front of him. Henderson capitalized on the restart and dove to the bottom to power into the lead exiting turn two. Besides a caution on Lap 15 that bunched the field back up, he went untouched to capture his fourth checkered flag of the season at the track by a margin of 2.428 seconds. The win extended his points lead at Huset’s Speeway to 25 points.

“I had a ton of confidence pulling into Huset’s and it just seems like we have a program that is good no matter what the track gives us at that place,” he said. “A few of the tougher cars got together in front of us and from there I felt like we were the car to beat. We just barely missed a perfect night by timing in second in time trials and lost out on a bonus there, but overall, it’s hard to be upset when you’re in Victory Lane at the end of the night.”

Next up for Henderson and Sandvig will be another two-race weekend. They’ll head to Knoxville Raceway on Saturday for 3M Race Night and Huset’s Speedway on Sunday for Nordstrom’s Automotive Night.

“We’re running extremely well right now and we are as good of a program as we’ve ever been in all areas,” he said. “Unfortunately, when you are running so well sometimes you can put unrealistic expectations on yourself as a result. Up to this point the mindset has been to just hit our marks and do our best and the results will come. It’s up to me to not change that and just keep driving the way I can. If I can do that, I expect to keep finding my way up front at the end of the night.”

Saturday at Knoxville Raceway in Knoxville, Iowa, and Sunday at Huset’s Speedway in Brandon, S.D.

“Greg has been a long-time supporter of mine in my own deal for years and he’s come on board to help with Mike’s deal as well,” Henderson said. “He’s done a lot for the sport and my career and that makes it even more special when we can run well together.”