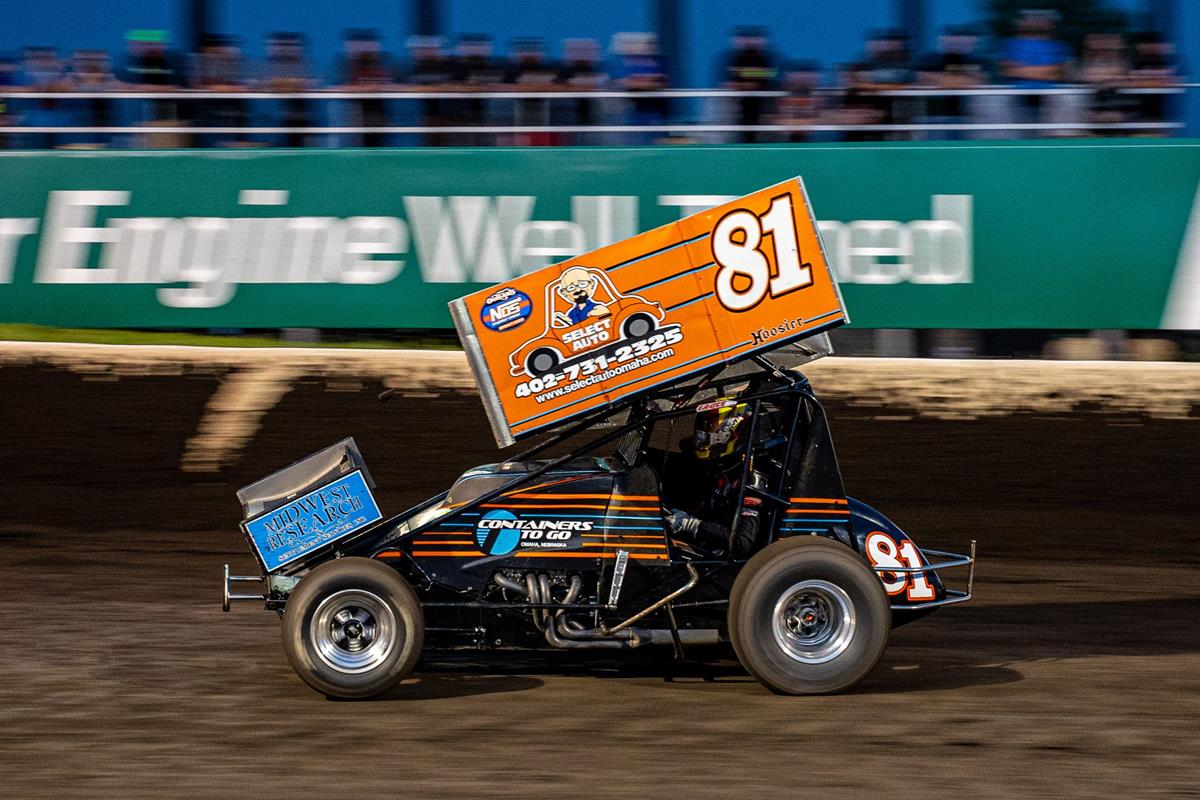 However, it was a weekend of what-ifs for Dover and car owners Rick and Chris Bowers.

The Buffalo Wild Wings Northern Outlaw Sprint Association tripleheader began on Friday at Jackson Motorplex in Jackson, Minn., where Dover qualified second quickest in his group before advancing from fourth to win a heat race.

Dover nearly duplicated that success at the start of the main event as he hustled from fourth into the lead on the opening lap, but a caution erased the strong start. The move Dover used the first time wasn’t available on the second attempt to start the race and Dover ran third for most of the feature.

“We were really good,” he said. “We were right there with second most of the time and ran third most of the race. I just wasn’t aggressive enough with lapped cars and that’s what cost us a spot in the final laps so we finished fourth.”

Dover returned to the track on Saturday when he timed in seventh quickest in his group. A runner-up result in a heat race lined him up on the inside of the sixth row in the main event.

“We went out later in time trials and that didn’t help matters,” he said. “In the heat race Brian Brown didn’t pull away from us and he’s won some races there so we knew we were decent. We just didn’t get a very good start. Then in the feature we were up to seventh at one point. The last two laps for some reason I tried the middle in turns one and two and got passed by a couple of cars. I probably should have stuck with the line I was running and we’d have ended up seventh.”

Dover’s ninth-place result was his ninth top 10 of the season.

The weekend concluded on Sunday at Huset’s Speedway, where Dover set quick time during qualifying for the first time in his career. Unfortunately, misfortune struck early in a heat race.

“In the heat race we moved up a position and I was running third,” he said. “I went down into turn one and hit the bottom. I was sliding up out of turn two. As soon as I hit that cushion the rear axle snapped and it sent me flipping.”

The team made repairs in time for Dover to start last – 27th – in the A Main.

“We started thrashing and got it done come feature-time,” he said. “You don’t know how the car will react or what it will do so it’s kinda scary the first couple of laps. The car was working really good. I gained probably 60 percent of my positions on the bottom. We moved up top and got some cars. It was working good wherever we went. We went out there with tires that weren’t cut and didn’t have it set up the way we wanted so to make the progress we did and nearly get a top 10 was great.”

Dover gained 16 positions to finish 11th. The performance earned the Hard Charger Award for passing the most cars.

“I’m disappointed but happy at the same time,” he said. “We had a really good weekend going and just ran into terrible luck. But overall we’re happy with the speed we displayed each night and hopefully we can keep it up this week with the Outlaws.”

“Husker Diesel has been with our team for the last couple of years,” Dover said. “I’ve known Jake, who is a head guy there for 10 or 15 years. We’ve become close friends and I’m grateful for the support of everyone at Husker Diesel.”