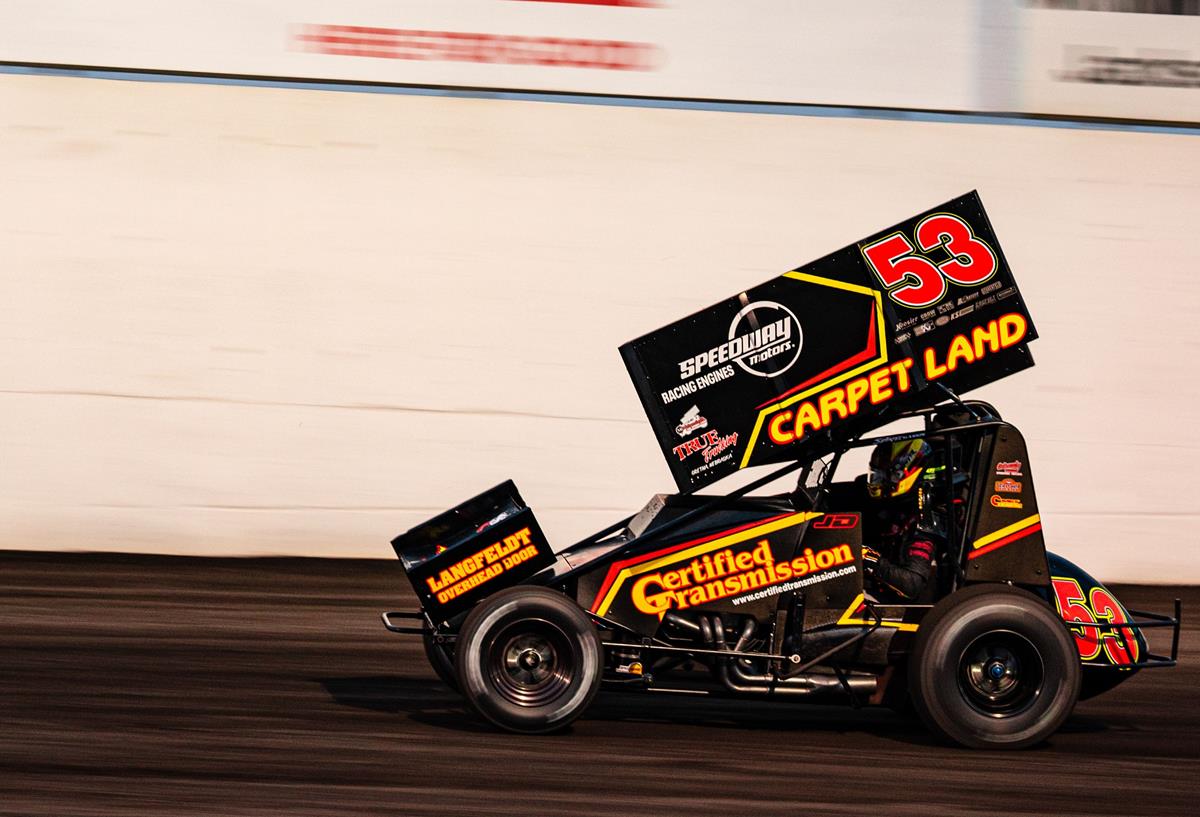 “There were 45 to 50 other drivers there and throughout the three nights we ended up second in points overall,” he said. “We were going there to win and didn’t come away with one of those, but it was still a great weekend.”

The Midwest Power Series and Midwest Sprint Touring Series spectacle started last Saturday at Jackson Motorplex in Jackson, Minn., where Dover qualified seventh quickest in his group. A runner-up result in a heat race locked him into the 11th starting position in the main event.

“We had a great first start of the heat race and would have probably got out in clean air and won, but the guy on the pole spun and that moved Clint Garner up,” he said. “When you give a guy like Clint Garner the pole he’s not going to mess up. He was able to get in front of us and the track was too good at that point to do anything.

“Come feature-time I didn’t do anything special or different; I just drove the wheels off of it. Everybody kept trying to hit the bottom in turns three and four, which was a thin line to hit. I was able to carry so much speed into turn three. It was a little better line than the bottom because we had so much momentum and speed.”

Dover methodically worked his way to a third-place result.

Racing shifted to Huset’s Speedway for the following two nights. Dover timed in fifth quickest in his group before a heat race victory gave him the outside front row starting position in the A Main.

“We had a good start to the night,” he said. “In the feature we fell back to third and with four laps to go someone right in front of us got crossed up in turn four. I had a lot of speed. I had to check up a lot and that unloaded my car, which put us into the frontstretch wall and packed my right front wheel full of mud. I had a really good run on him and was fixing to do a big slide job in turns one and two before that happened. We were lucky to salvage a fifth-place result after that.”

Dover wrapped up the weekend on Monday by advancing from sixth to fourth place in a heat race to garner the second starting spot for the second straight night.

“We didn’t get the car to come off the corner like we wanted it to,” he said. “I think it was a fueling issue on my part. I struggled with it on Sunday and tried something different on Monday. I think I went the wrong way. I’m happy to finish third considering the car wasn’t top notch.”

Dover’s third-place effort was his 23rd top five of the season.

Dover returns to action this Friday and Saturday at I-80 Speedway in Greenwood, Neb., during the Bobby Parker Memorial and the Casey’s Midwest Fall Brawl with the Lucas Oil ASCS National Tour. He has won three races at the track this year.

Friday and Saturday at I-80 Speedway in Greenwood, Neb., for the Bobby Parker Memorial and the Casey’s Midwest Fall Brawl with the Lucas Oil ASCS National Tour

“Husker Diesel has been with our team for the last couple of years,” Dover said. “I’ve known Jake, who is a head guy there for 10 or 15 years. We’ve become close friends and I’m grateful for the support of everyone at Husker Diesel.”