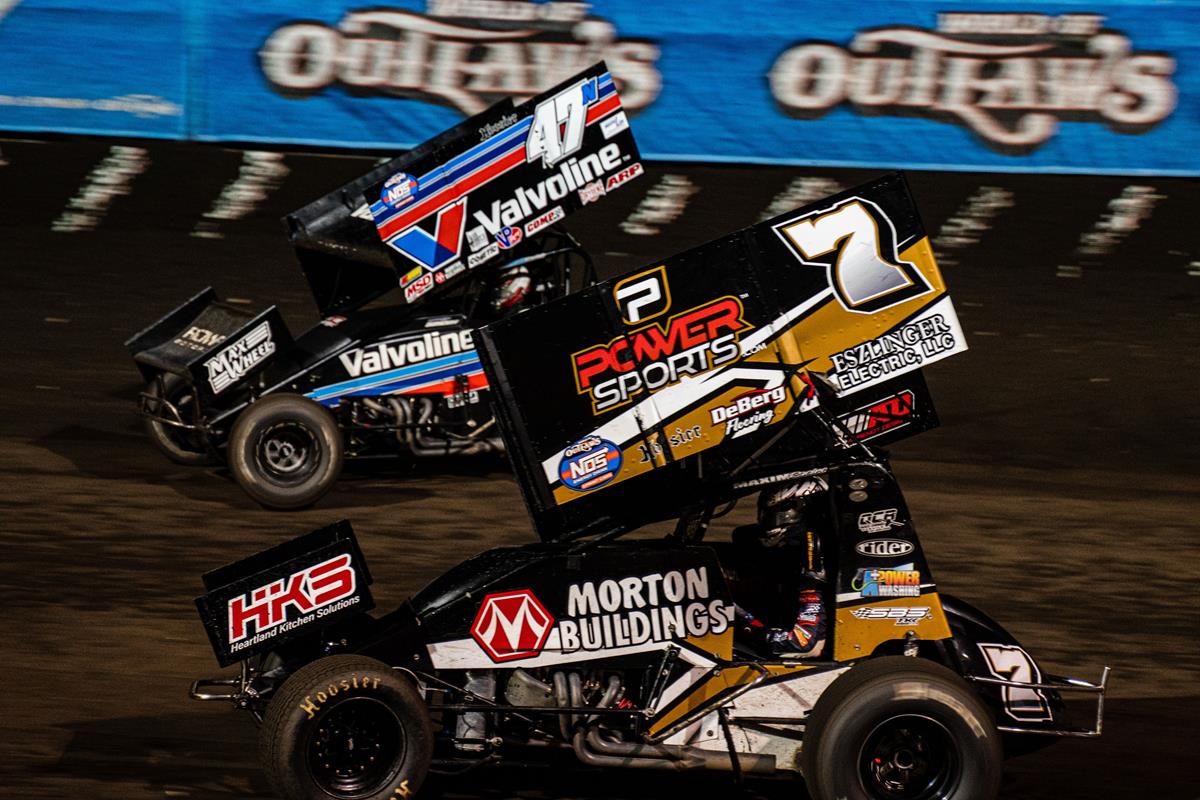 Unfortunately, a mechanical problem thwarted their effort to win a fifth feature of the season at the oval and Henderson ended the Pioneer Seeds Bin Buster Bash with a disappointing DNF.

"I was going around the outside of a guy and got into the wall and broke a shock and the Jacob’s Ladder,” he said. “The car just wasn’t the same after that. I can't say for sure how the night would have gone, but it's tough when you don’t even really get a chance to find out."

With 37 cars in attendance, Henderson kicked off the night by qualifying 16th quickest. He then finished where he started – fourth – in a heat race to lock directly into the 16th starting position in the A Main.

"I felt decent early in the night, but for whatever reason the car just never felt alive all night," he said. "We were just kind of driving around and couldn't seem to find speed to pass guys with how the track was."

Henderson fell to 20th on the grid after the incident with the wall and he stayed steady despite the damage caused. When a mid-race caution presented itself, Henderson came to the pit area with hopes of fixing the problems, but the team deemed the damage too substantial and he retired for the night.

"I pulled in to try and repair the car and the guys told me we were done," he said. "It would've been nice to see how things went in the feature, but I really only got a half a lap before we broke the right side off it."

Henderson and Sandvig turn their attention to weekly competition this weekend. They'll compete on Saturday at Knoxville Raceway in Knoxville, Iowa, for the track’s championship finale and on Sunday they'll join the Buffalo Wild Wings Northern Outlaw Sprint Association at Huset's Speedway.

Henderson enters the event at Knoxville Raceway currently second in the standings, trailing by only 78 markers. He currently sits atop the standings at Huset's Speedway with a 16-point advantage with less than a month remaining on the schedule.

"I feel really good about the Huset's championship, but the Knoxville championship isn't out of the question by any means," Henderson said. "If we get a couple nights back from early in the year, we've got a decent sized lead at Knoxville. Seventy eight points seems like an uphill climb, but I still have confidence in our program and we're going to give it our best shot."

Saturday at Knoxville Raceway in Knoxville, Iowa, and Sunday at Huset’s Speedway in Brandon, S.D.

“Greg has been a long-time supporter of mine in my own deal for years and he’s come on board to help with Mike’s deal as well,” Henderson said. “He’s done a lot for the sport and my career and that will make it even more special when we can run well together.”