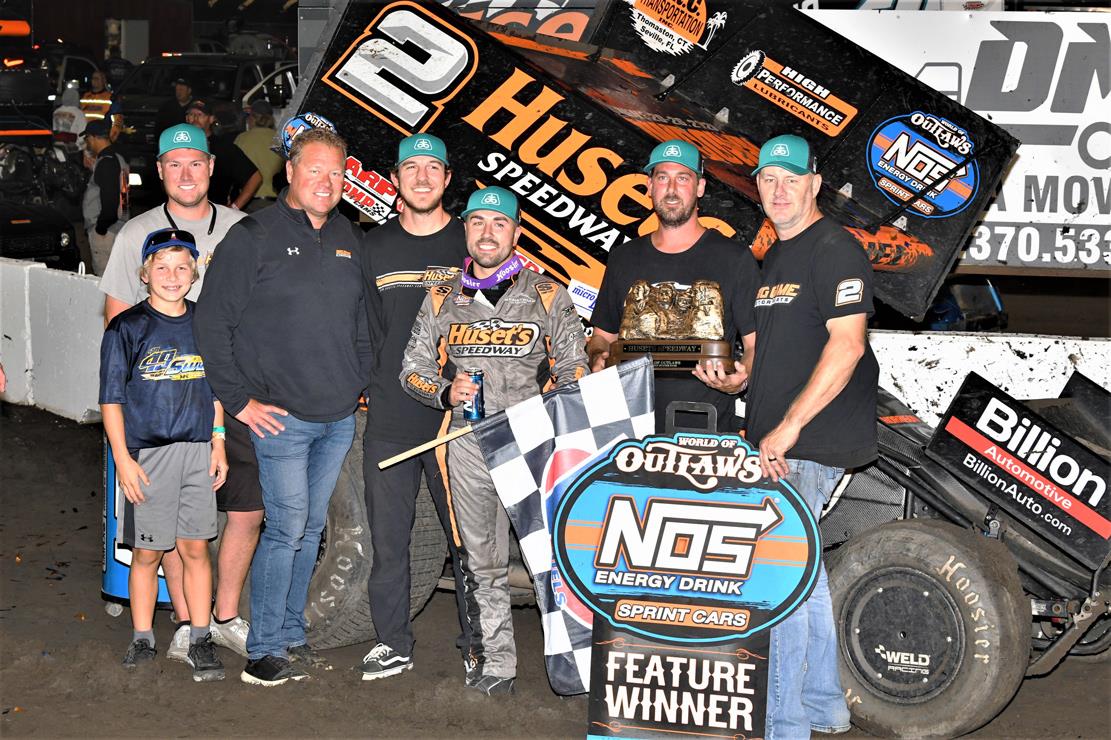 It capped a strong weekend with the World of Outlaws NOS Energy Drink Sprint Car Series that also included a runner-up result on Saturday during the Gerdau presents the Duel in the Dakotas at Red River Valley Speedway in West Fargo, N.D.

Gravel started the weekend’s action by qualifying 10th quickest at Red River Valley Speedway. A run from fourth to second place in a heat race earned a spot in the dash, which the Big Game Motorsports driver won after lining up on the outside of the front row.

“We didn’t qualify where we wanted to, but when you start on the second row you have a chance of getting into the top two,” he said. “Luckily we were able to do that to get into the dash. We had a good pill draw, won the dash and that set us up for a solid night.”

Gravel led the opening lap of the main event before falling to second. He dropped as far back as fourth before a daring pass picked up two positions to reclaim second place in the closing laps.

“I chose the outside on the early restart and that was a mistake,” he said. “The motor stumbled and once that happens the inside guy can take the shorter path around so it’s a huge advantage. If I was in the inside lane maybe I could have got away with it. You live and learn.

“Late in the race I had a big run and if I followed James (McFadden) or Logan (Schuchart) into the corner I was going to make nothing of it. I ran it in there really hard and I slid up in front of those guys. I’m sure it’s a move that they would have done if the roles were reversed.”

Gravel was on point on Sunday at Huset’s Speedway, where he set quick time during qualifying, placed second in a heat race and advanced from sixth to fourth in the dash. That lined him up on the outside of the second row for the 35-lap main event.

“Huset’s is a place that is really tight with tight corners and a small track,” he said. “It had rained hard all day. Getting track position was huge so to set quick time was great. Controlling your own destiny makes life so much easier. We were able to get into the dash. We drew the six. I hoped to gain two spots to get to fourth to have a nice shot at things and we were able to do that.”

Gravel maintained the first half of the feature. He advanced into the runner-up position and tracked down the leader in traffic before taking over the top spot on Lap 24. A pair of late-race cautions, including one setting up a green-white-checkered finish, bunched the field together. However, Gravel easily pulled away in clean air to score his third triumph of the season at Huset’s Speedway.

A race last Friday at River Cities Speedway in Grand Forks, N.D., was postponed to this Wednesday because of wet weather. Additional World of Outlaws races this week include Friday at I-80 Speedway in Greenwood, Neb., for the FVP Platinum Battery Showdown and Sunday at Black Hills Speedway in Rapid City, S.D., for the Rushmore Outlaw Showdown.

Wednesday at River Cities Speedway in Grand Forks, N.D., for the Gerdau presents the Second Leg of the Northern Tour; Friday at I-80 Speedway in Greenwood, Neb., for the FVP Platinum Battery Showdown; and Sunday at Black Hills Speedway in Rapid City, S.D., for the Rushmore Outlaw Showdown with the World of Outlaws NOS Energy Drink Sprint Car Series

Huset’s Speedway is a dirt oval located in Brandon, S.D. The track opened in 1954 and has undergone a large renovation within the last few years, making it a premier destination for both marquee racing events and weekly programs. For more information, visit http://www.HusetsSpeedway.com.

To purchase online tickets for events at either Huset’s Speedway or at Jackson Motorplex, visit http://mpv.tickets.com/schedule/?agency=JKMV_PL_MPV&orgid=55369#/?view=list&includePackages=true.