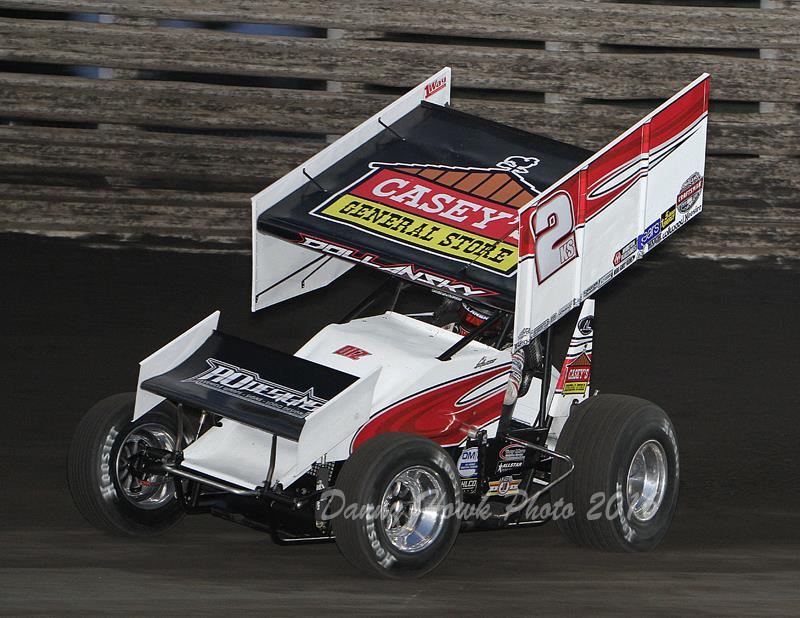 The TKS Motorsports #2KS and driver Craig Dollansky locked themselves into the 56th Knoxville Nationals last weekend. It was the culmination of a lot of hard work for the team over the past two seasons. Unfortunately, a part failure ended their Saturday night, but they will be back this weekend racing at the Gold Cup at Badlands Motor Speedway near Brandon, South Dakota.

Last week started at the Front Row Challenge in Oskaloosa. Craig would finish tenth. “Monday night at Osky, we got ourselves off a little bit,” says TKS Motorsports owner and crew chief, Troy Renfro. “The air was really bad and I was a little off on our fueling. The HP engine we were using has run great all year. I can’t say enough about Al Parker. He helped us out and got it on the dyno Tuesday, and we got our numbers squared away. We got things fixed up for Wednesday at Knoxville.”

The team would have a new red and white scheme for Wednesday’s qualifying night at Knoxville. “We kind of got mixed reviews on that,” says Troy. “Some people liked it, and others preferred the black and blue. We went with the scheme, because we had a couple of partners we were working on that it fit with. They ended up falling through, which was tough for our team. But Aaron Ott did a great job. We took our same design and changed the colors. The white part was all carbon fiber wrap, and Schneider Graphics did that part for us. But we’re headed back to black and blue.”

A late pill (41st car out) was drawn, but Craig timed in eighth quick. “The racetrack was a double-edged sword,” says Troy. “It was good enough for us to go out really late and qualify well. On the other hand, when it’s narrow in the heat race, it’s very hard to get to fourth from the fourth row. We knew we needed a tremendous start, and we didn’t. We had to make that up. Some guys in front of us did what they had to do, and we missed it by one spot.”

Craig went from sixth to grab the last transfer in the B main, and then made a charge in the feature. “We did what we had to do in the B main,” says Troy. “Then we came from 24th to eleventh in the feature. The car was really good all night. Craig did a really great job. I can’t say enough about our team. I really can’t.”

It was enough points to lock Craig into Saturday night’s championship event. “My wife Tammy and I talked before everything started,” says Troy. “We decided if we could get locked in on the first night, we would be ecstatic. We’re a small, family team. That doesn’t mean we don’t have a ‘first class ride’. We consider this a first class ride. We don’t have hired help, but our guys donate their time, energy and effort so we can succeed. It’s hard for a person looking at it from the outside to understand what kind of commitment goes into all of this.”

It was unfortunate that the run in Saturday’s 50-lapper was cut short. “We were good,” says Troy. “We weren’t so good hot-lapping, but we talked about a few things. We made a couple of changes, and we were really good. It was just unfortunate that we had a fitting on the power steering line break. It wasn’t meant to be. We didn’t know what the source of the problem was, so I was up until about four o’clock Sunday morning. It was a crack in the fitting. I was back up at seven and cleaning everything. We were disappointed, but we were happy. I was already thinking about the Gold Cup this weekend at Badlands, and about the NSL and getting that point lead back.”

Troy says he had his share of supporters calling. “Don Lamberti (Casey’s General Stores) called and so did Bob Myers. Those two guys are just great people. They are uplifting, positive people. They both knew I was a little down and they have a way of motivating people. I was really happy that they called. We’re ready to finish out the year strong. Craig has done a great job. We’ve worked so well together. I wish we could have worked together a lot sooner than this. I’m really proud of our team, and how far we’ve come in a year. The big thing is Craig is healthy this year, and that has shown.”

The team is looking forward to Badlands. “We’re kind of excited to go up there,” says Troy. “I’ve heard so much about what Chuck Brennan has done up there. It’s probably been two or three years since I’ve been there. I’m anxious to see what’s been done there and what everything looks like.”

TKS Motorsports is always open to new perspective partners! Whether you’d like to partner with the team for the full season, or put your company’s name on the nose wing for a night of your choice, contact Troy at tsrenfro8725@gmail.com!

To Subscribe to TKS Motorsports Releases, e-mail “TKS” to sprntcar@hotmail.com!