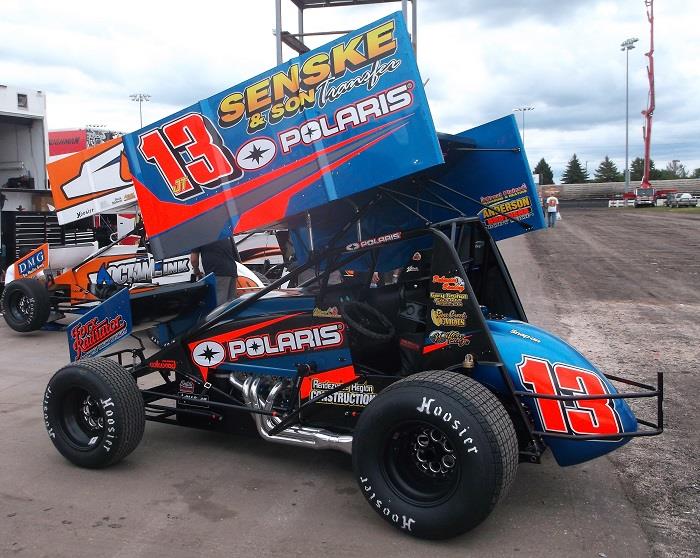 Mark Dobmeier and the Jimco Racing/Polaris #13 team follow up their runs at Southern Iowa Sprintweek with this weekend’s Gold Cup at Badlands Motor Speedway near Brandon, South Dakota. The Grand Forks, North Dakota driver finished the Knoxville Nationals just two spots from the championship event on Saturday night. The team will be performing double duty this weekend, with the wing and without in a quest for some big cash at Badlands.

Mark and the team started at Knoxville with the Capitani Classic a week ago Sunday, and also ran the Front Row Challenge at the Southern Iowa Speedway in Oskaloosa last Monday (finishing 11th). “We rolled in with a new car,” he says. “We spent the Cappy Classic and Oskaloosa working the bugs out and getting everything dialed in.”

The team qualified at the Nationals last Thursday. “I felt we were decent,” says Mark. “We drew the big pill (coming out 48th) and we knew that could be a disadvantage, but Knoxville did a great job on their track prep all week long and made it so we could turn a decent lap. We salvaged 24th quick, which turned out to be a good spot.”

Mark started fourth in his heat race. “We had a good heat race, moving up one spot and finishing third,” he says. “We were really close to making that feature invert. We were one spot out of making the pole.”

Instead, he would start ninth. “We moved forward and backwards in the feature and ended up finishing ninth,” says Mark. “Overall, it was a decent night. It was enough points to lock us into Saturday’s B starting eighth. We couldn’t complain about that too much.”

Avoiding the 77-car field that had to requalify Friday was a plus. Mark was ready for Saturday’s 22-lap B main, where he would start outside row four. “The initial start, we had a really good start,” he says. “Unfortunately, that got called back for (Danny) Dietrich getting tangled up. We had a terrible start the next time. We were boxed in in the first corner. I was back to tenth.”

He would battle back and get faster as the race went on. Unfortunately, he would fall two spots short of a transfer. “About three laps in, the car just got better and better and we started moving forward as the race went on,” says Mark. “We were able to pass a car, run up to the next one, pass it and do the same. I was really hoping for a yellow at some point that never came. At the end, we were running sixth instead of fourth. I think it would have been a whole different deal if we had a yellow. I think we had a good shot at it.”

The sixth place finish in the B still paid $7,000. “For not running Knoxville on a weekly basis, we were happy,” says Mark. “We got some things figured out. We weren’t overjoyed not making the A, but we were satisfied with our results.”

The weekend’s Gold Cup at Badlands will see the winged sprinters qualify Friday, and the non-wing sprints Saturday. The main events will be Sunday, with both features paying $50,000 to win. Though Mark has been on fire at Badlands, this will be his first time running a non-wing car. “We’re extremely excited about this weekend,” he says. “This will be the first time I’ve ever run a wingless car. I’ve never even hot-lapped a car wingless. We’re going to kind of work on it over the weekend and see what happens. I’d say we’re going to ‘wing it’, but I guess we’ll ‘non-wing it’! We’ve gotten a few tips here and there. We’ll see how it goes.”