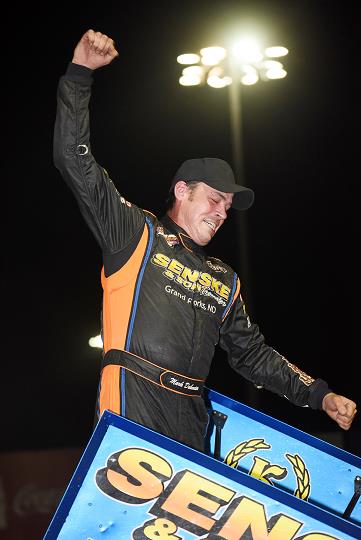 The month of July was one to remember for Mark Dobmeier and the Jimco Motorsports/Polaris #13 team. Winning eight out of ten features (the other two were Outlaw shows at Badlands) will make a month pretty memorable! The Grand Forks, North Dakota driver is on a seven-race winning streak. Last Friday night, he had to work to bring his winning run at his hometown River Cities Speedway to six in a row. Saturday, Mark won his fourth straight at Badlands Motor Speedway south of Brandon, South Dakota. This weekend, he’ll see action at not only those two facilities, but at Knoxville Raceway in Iowa for Sunday’s Capitani Classic.

Mark ran third in his heat Friday night at River Cities, and lined up ninth to start the main event. “I didn’t think I was going to get the job done on Friday,” he says. “The track was extremely dry. There was just a strip around the top. The only way to get by somebody, was to get behind them on the top and do a slide job to get by them. It would take two or three laps to catch the guy in front of you, so the race was spent chasing.”

He was running third late in the race. “A yellow saved us with about five or six to go,” says Mark. “The leader ended up sliding off the end, so we inherited second. Casey Mack was leading it, but even on the double-file restarts, he was beating me. He’d start on top and I’d start on the bottom. He’d drive away on the start. I could stay with him, but not enough to get by.”

Another caution within the last five laps meant a single-file restart. “I was able to get a good run on him and get a slide job done in the first corner,” says Mark. “It was a good fought race right down to the wire. I didn’t think we were going to be able to do that, but we snuck around at the very end.”

Things started well for Mark at Badlands Saturday. “It was a great night for us again,” he says. “We finally got our first quick time of the year. We’ve been steadily getting better at that. We started the heat fourth and we were able to pass a couple of cars to get second there. We had a nice battle with Dusty Zomer. He was running the top, and I was running the bottom.”

Though he drew the pole, he would have his hands full with Justin Henderson. “We drew the lucky number one,” says Mark. “I carried a wheelie all the way down the frontstretch. I grabbed the bottom of one and two and thought I had enough to get by Justin. Coming down the backstretch, he just flew around me on the top. It surprised me to be honest.”

The chase was on for Mark. “He was running a blistering pace,” he says. “I could stay with him, but I didn’t have enough to pass him. I did the best I could to just stay with him. I knew my only shot would be lapped cars. There was a yellow about halfway through, which was discouraging, because I needed those lapped cars. We got going, and there was another yellow.”

Lapped traffic would come in the final circuits. “Finally, with about two laps to go, we came upon two lapped cars,” says Mark. “One was running the top, and one was running the bottom. Justin had to make a choice, and he picked high. Obviously, going low was my only shot. We stuffed the bottom of three and four and there was enough moisture to hold us down there. We had the lead and we were able to hold on the last two laps.”

Mark is thankful for his team’s hard work. “It was a weekend full of good, hard racing, and we had to earn those wins,” he says. “I just can’t say enough for this team. We formed it two years ago. Ryan and Jennie and Jim and Cindy have done everything to keep this equipment under us, and we finally have it really jelling.”