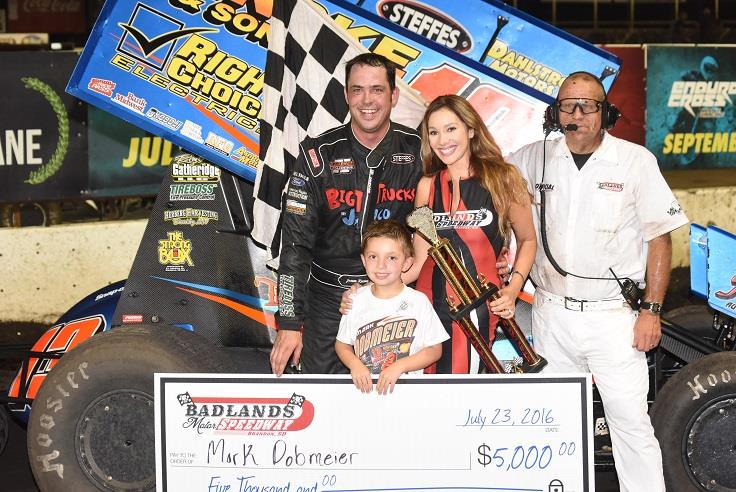 Mark Dobmeier- Five in a Row!

Mark Dobmeier and the Jimco Motorsports/Polaris #13 team on certainly on a roll right now! The Grand Forks, North Dakota driver has reeled off five wins in a row, bringing his season total to eleven. In addition, he has won four in a row at River Cities Speedway in Grand Forks and three in a row at Badlands Motor Speedway near Brandon, South Dakota. He won at each facility again last weekend.

In the past couple of weeks, Mark has won at River Cities on July 8 and 22, and at Badlands July 9, 16 and 23. “We’ve been running really well at Badlands,” he says. “Without a parts failure we had about three weeks ago there when we crashed out of the lead, we’d have one more win there. We’ve had some decent draws and we’ve been able to capitalize on them. The crew has been working really well together, and everything has been clicking and banging.”

Last Friday night at River Cities, he started eighth in his heat. “We were able to drive up to second in the heat,” says Mark. “We started the feature ninth, and we were able to pass Cory Mack with around ten laps to go. It was a pretty racy track. There was a pretty good bottom groove, but we were able to rip it around the top a little faster. River Cities and Badlands both had pretty excellent tracks last weekend. They both had a top and a bottom and slicked off in the middle.”

The past two events at Badlands, Mark has timed in second quick. “The last few weeks we’ve been dialing in our qualifying where we need to be,” he says. “Again, the crew keeps working harder. I don’t think we’ve had the same setup at any time this year. We just keep trying things to make the car better. There are some subtle changes that have helped us out.”

His draw has helped him out a bit the last three weeks at Badlands. He started third in the feature on July 9, fourth on July 16 and third again last Saturday. The win Saturday was his 64th at Badlands. The win Friday at River Cities was his 122nd there.

There is plenty of racing in the upper Midwest this weekend, but the team is a little unsure of their plans right now. “The car owner Ryan Grinde is actually down in Minneapolis having some eye surgery,” says Mark. “So our plans for this weekend really depend on how that goes. We want to send our best to him, of course.”